Vauxhall is warning Zafira drivers to avoid using their car heaters as usual this winter in case they burst into flames.

In letters set to be sent to Zafira B owners next week, the car manufacturer will advise drivers to only use heater fan speed 4 “sparingly” in short bursts and to de-mist. 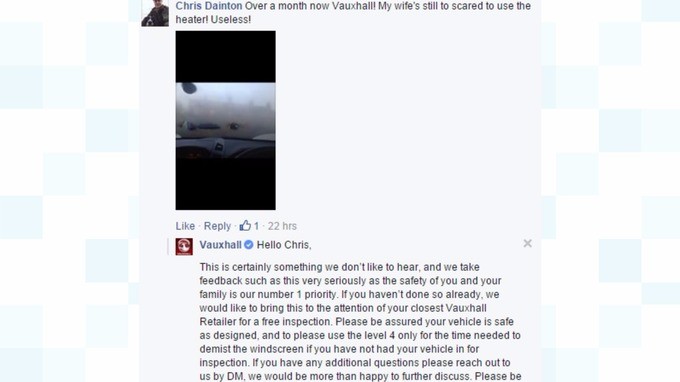 The warning about heater settings has already been issued online in response to concerned customer’s Facebook posts Credit: Facebook

The warning, which follows the recall of as many as 220,000 Vauxhall cars for inspections earlier this month after a number reportedly burst into flames, is reportedly being issued as a result of Vauxhall finding the root cause of the fires are botched repairs around the heater unit

Vauxhall will rightly point out that only a very small percentage of its Zafira B cars have burst into flames. But of course, even one fire is far too much.

Vauxhall has now established the “root cause” of the fires and is about to send out thousands of new safety warning letters.

The advice they are giving means drivers will effectively be faced with a stark choice – risk getting cold or risk your vehicle dramatically overheating.

Previously Vauxhall announced batches of letters would go to owners starting with those with the oldest vehicles. These warn people of the problem and say they will be invited for a free car inspection.

Now we’ve learned that a new letter will also go out to all 220,000 owners at once,on Monday.

Owners will be advised to only use heater fan speed 4 “sparingly” in short bursts and to de-mist – until the cars are properly inspected.

This is because the company has found the root cause of the fires to be botched repairs around the heater unit.

So far only 20,000 of the 220,000 Zafira B vehicles have had the safety inspection. While thousands wait for their turn, further fires seem inevitable.