Top Gear presenter Andrew “Freddie” Flintoff was injured and taken to hospital to receive medical treatment after being involved in an accident while filming for the show.

The incident happened on Tuesday morning while the 45-year-old former professional cricketer was filming at the Top Gear test track at Dunsfold Aerodrome in Surrey.

A BBC spokesperson said: “Freddie was injured in an accident at the Top Gear test track this morning – with crew medics attending the scene immediately.

“He has been taken to hospital for further treatment and we will confirm more details in due course.”

The father of four, who has presented the BBC One show since 2019, was airlifted to hospital following the incident, but is not thought to have suffered any life-threatening injuries, The Sun reported.

Flintoff, who was appointed England cricket captain twice, first in 2006 and 2007, retired from the international stage in 2010, briefly returning to play for Lancashire four years later.

Following his successful sporting career, he became a familiar face on television, joining various reality and panel shows and appearing as the face of the supermarket brand Morrisons.

In 2010 he became a team captain on Sky’s A League Of Their Own, hosted by James Corden before being crowned king of the jungle in the first series of the Australian version of I’m A Celebrity…Get Me Out Of Here! in 2015.

After appearing in the BBC drama Love, Lies and Records in 2017, he went on to make his musical theatre debut in  Kay Mellor’s Fat Friends The Musical and hosted All Star Musicals for ITV in December the same year.

He was announced in October 2018, ahead of the show’s 27th series, as a new host of Top Gear alongside Paddy McGuinness and Chris Harris.

Tuesday’s accident is not the first faced by Flintoff since he began working on the programme.

In February 2019 the presenter was involved in a minor incident when he crashed into a market stall in Mansfield, Nottinghamshire.

In September of the same year he crashed again while driving a three-wheel vehicle at a reported speed of 124mph during filming for Top Gear at Elvington Airfield in Yorkshire, but walked away from the incident unharmed.

Former Top Gear presenter Richard Hammond was involved in a serious crash at the same airfield in 2006, leaving him in a coma.

Baker joined the original format of the BBC series died on Monday after suffering from motor neurone disease (MND). 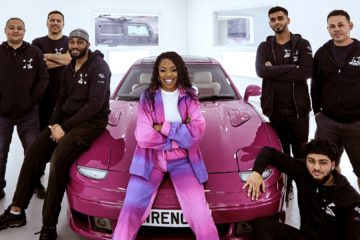 Pimp My Ride is coming back to the UK

Hosted by British rapper Lady Leshurr, the new six-part series on MTV’s YouTube channel will highlight the cost and environmental benefits of buying second-hand parts via a partnership with eBay’s Certified Recycle Hub. The new series appears to have a large amount filmed in America, with the trio shown racing buggies through the alligator-infested swamps of Florida, drag racing ‘donks’ in Miami, and cruising around in a massive motorhome.